Merhaba and Welcome to Istanbul!

Apparently, my last blog title was not too accurate. After a short three week stint in good old Madison, Georgia, I have returned to Asia. I arrived in at my apartment on the Anatolian side (Asian part of the city) of Istanbul late Thursday afternoon. I should have arrived Thursday morning, but a three hour flight delay combined with my driver stopping five times for personal reasons, asking for directions no less than eight times, getting lost, and getting a flat tire along the way added a considerable amount of time to an already exhausting day. Alas, I made it!

After deplaning in Istanbul, I spent approximately an hour attempting to manhandle my three suitcases and exit the airport. I ended up getting a luggage cart, but I could not actually lift my one 70 pound behemoth onto the cart so I used one hand to push my overloaded cart and dragged one suitcase behind me. I hate being THAT girl. As a seasoned traveler, you think I would have learned the art of packing light by now, but I really NEEDED everything in those suitcases. So, for the second time in a month, I hauled my life halfway around the world to a new home. 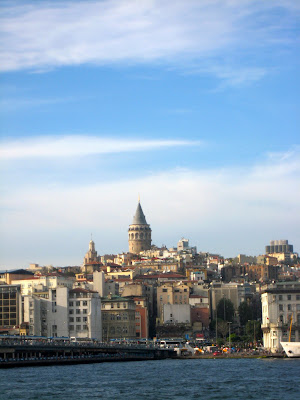 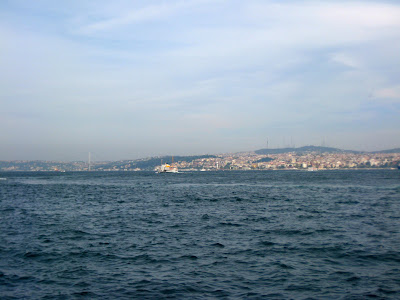 The Bosphorus. I live on the side you see here-- the Anatolian side!
When I exited the terminal, I was greeted by a driver from my company. He immediately said "I speak no English," and I told him I speak only a little Turkish. I was quite proud of myself though when he asked me in Turkish if I was hungry. I was able to respond in Turkish to let him know I just ate on the airplane - "No, I to eat meat, assorted fruit, milk, water, coffee." He laughed and later recommended I take a cruise on the Bosphorus during my time in Turkey, and I was again able to respond - "Yes, sea views are very nice" which might be the only complete sentence I currently know how to make. My Beginner's Turkish book is great, but I've learned a lot of dialogues that are irrelevant to what I need to be able to say right now. Take me to a fish restaurant or a campground though and I'm going to be an allstar.

Friday, I spent most of the day cleaning the new apartment. The owners have an obscene amount of stuff still here-- all the drawers and cupboards are full of really ugly decor. My roommate, Katy, and I have just been stuffing it in cupboards and trying to put most of it out of sight (Things like the hot pink disco ball dangling in my room and the jungle curtains that grace my windows). Sunday was completed with a serious expedition to IKEA in order to get the final touches for the new place.

Our apartment is really spacious and nice, but the views are the best part. From my bedroom window, I can see the sea of Marmara, the city, mountains, and a nice park. There is a similar view from our living room and balcony. Istanbul is stunningly beautiful, and I've been appreciating it every day as I listen to the Call to Prayer 5 times daily, look out my window at the Sea of Marmara, and watch the daily transactions of the people of Istanbul. 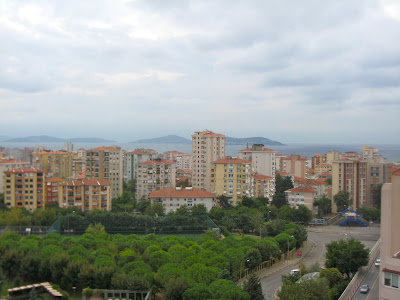 View from our balcony! 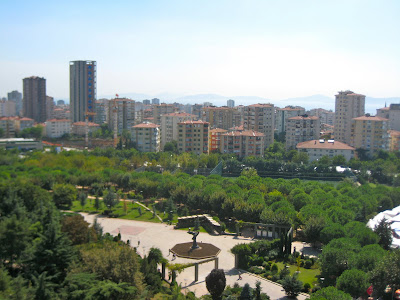 View from our balcony! Sea of Marmara and Princes Islands

Katy, and I have done lots of exploring. She studied in Istanbul several years ago so our exploring consists of her leading and explaining and me following and chattering most of the way. We went out to dinner with some of her co-workers Friday night to a charming little district named Ortaköy. Tons of people piled into a tiny dimly-lit restaurant for a mezzes style meal. (Mezzes are like appetizers-- tons of little dishes). We dined on delicious beans, hummus, bread, cheese, tomatoes, salad, and a few other unidentifiable, yet tasty, Turkish dishes. About halfway through the meal, several men with Turkish instruments appeared and began singing lively tunes that everyone but us seemed to know. The entire restaurant was singing, laughing, and enjoying their meal. It was probably right at this time that I decided I would be very happy here. 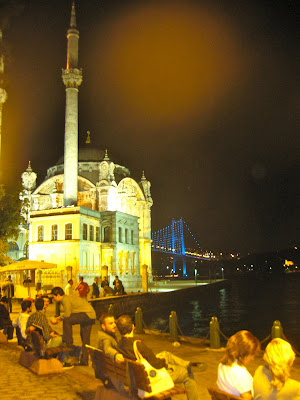 Mosque on the water in Ortakoy

We have also been able to dine in a cozy alleyway on great pasta, explore Taksim Square (the crowded, exciting, city center), and eat at a beautiful seafood restaurant on Galata Bridge overlooking the Bosphorus. On Sunday, we spent some time checking out Hagia Sofia which was, obviously, amazing and impressive. We topped this off by walking through the Blue Mosque which was even more beautiful. Hagia Sofia is stunning, but part of its thrill is its old age and combined Christian and Muslim history. The Blue Mosque's interior is amazingly elaborate, intiricate, and pretty - because it was also free, I plan on returning there more often! 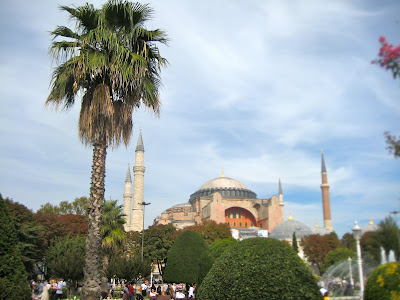 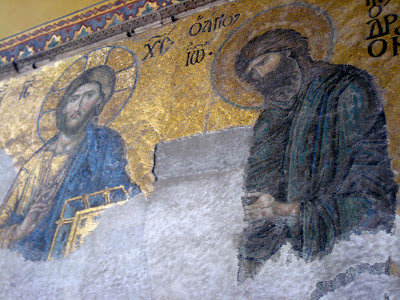 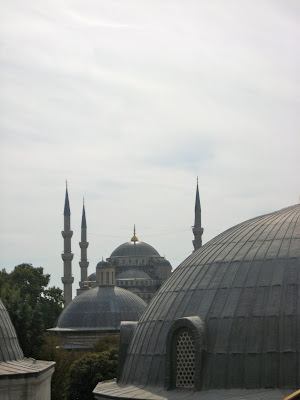 Looking at the Blue Mosque from inside Hagia Sofia 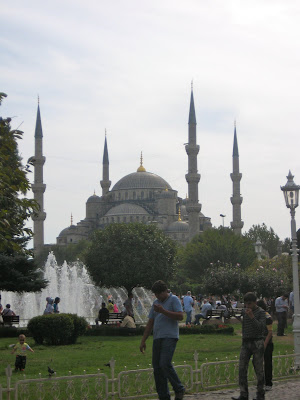 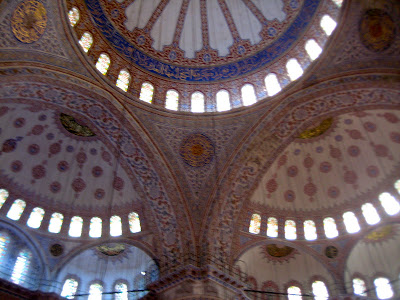 The Mosque gets its name from its stunning blue mosaic work
Each morning, Katy and I have to commute across the Bosphorus to get to work- part of the best and worst part about living in Asia yet working in Europe. We are still working on the fastest commute routes to figure this out, but currently, my route involves taking a ferry from the port near our home to a port on the European side of the city. It's definitely a trek, but any foul mood I have is pretty much lifted as I sail across the Bosphorus- Asia behind me and Europe in front of me, with amazing views of Hagia Sofia, the Blue Mosque, and the sloped hills of Istanbul as far as I can see. I'm working in Taksim which is an exciting part of the city which I will compare to Times Square in New York. It's packed with people, loud, yet exciting. Would I ever want to live there? Absolutely not. However, working in Taksim will hopefully prove to be quite exciting. 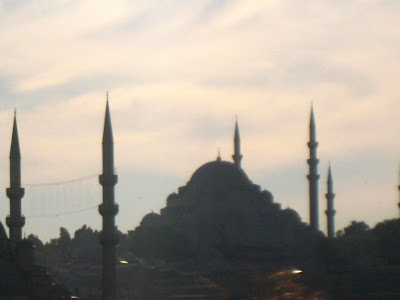 View from the ferry as I head home

My blog is changing after today to Where East Meets West, but the address is going to stay the same.

Have a great week and Happy Birthday Sarah!!
-Andie
Posted by Andie at 7:15 PM 1 comment: