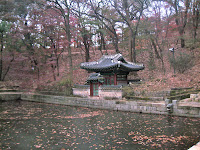 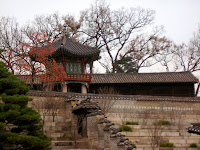 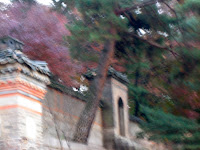 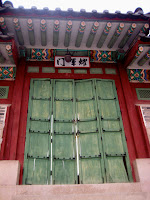 It's the week after Thanksgiving, and I am still surprisingly not homesick.  Living and working here is still great fun.  Last weekend, I spent the weekend shopping in Insadong, a traditional shopping neighborhod.  Most of the stuff in in Insadong is handmade and distinctly Korean.  Despite the freezing weather, there is so much to see here, and I spent hours going in and out of all the little shops.  There is silver, stationary, jewelry, scarves, and knickknacks.  I also spent last weekend touring Chongdeok Palace for a few hours.  This palace, although smaller than Gyeongbok - the first palace I toured in Seoul - is very similar.  Like a lot of things in Korea, its quite simple, but it has exquisite details.  That day was also cold and damp, but it was definitely worth the 2 hour walking tour of the grounds.

Thursday was Thanksgiving Day, and in order to celebrate my friends and I went out to try live octopus.  A video is below.  The octopus isn't technically still alive when you eat it- although it is still moving.  The restaurant we went to took a live octopus and chopped it up on a plate then set it on the table.  Octopus' are surprisingly strong little fighters- getting the moving tentacles off the plate with chopsticks is difficult because they suction themselves to the plate so tightly.  When you chew it up they tentacles also suction to the inside of your mouth.  They taste alright, but are very chewy.   I'm really glad I tried it; however, I'm not sure I'll eat this again.

Friday night I had a proper Thanksgiving dinner at an American restaurant.  A large group of us made reservations and actually got to have turkey, stuffing, and pie.  It was amazing.  I continued eating my way through Saturday at the Fancy Food Show in Seoul.  Although the show, held at a large exhibition hall in a nice area of the city, was mostly coffee, there were some dessert samples and also lots of wine tasting.

Anyway, teaching the last few weeks has been entertaining to say the least.  My 3rd and 4th grade class is still a huge challenge, but it is getting better.  The kids will not say anything in class though.  No matter what I say or do they all just stare at me like they are terrified and have no idea what is going on - I spend the entire 40 minutes mostly talking to myself.  I played a game with them on the first day where they had to stand in a circle.  After struggling to overcome the blank stares to actually get them in a circle, we played a get to know you game that was about as fun as pulling their teeth.  After we finished, I said, "Ok, good job, go sit down now."  All 23 little bodies just immediately dropped to the floor and continued to stare at me. I had to go tap a desk and demonstrate that I meant sit in your desk not on the floor.

In my other classes I always have to come up with different games to play.  One of my go-to games is Tic-Tac-Toe with words in the boxes.  (2 students stand up and one asks a question and one answers it using a vocabulary word in the box then the team gets an X or an O in that box).  For some reason, no one, including one of my co-teachers, can wrap their head around tic-tac-toe.  Even though they have started calling it "Little Bingo," it still seems to confuse the majority of my classes.  Go figure.

My students are amusing, but I don't think any of them can compete with my principal and vice-principals.  On Thursday our school's teachers had a volleyball game against the teachers at a neighboring elementary school.  The school brought along their English teacher, and I talked to her while we watched the game.  My principal, clad in a windsuit, walked up and asked her if she had a boyfriend.  He then added, "Andie...she...boyfriend.  He...ummm... he South Africa!  He verrrry, verrrrry FAT! (make awkward large gestures using windsuit)"  He then proceeded to crack up and walk away.  I don't even know where he comes up with this stuff.  My vice-principal is also hilarious.  He doesn't speak any English, but at 4:40 on the dot every day he throws his arm up and points to the door and yells, "GO TO YOUR HOME!"  At first it would startle me, but now it just makes me smile.

I miss you all, and I will try to be better about updating my blog!