After my exciting weekend in Gyeongju 2 weeks ago, I was eager to get out of the city again last weekend.  I really love Seoul, but coming straight out of Madison, Georgia and then the "bustling" Winston-Salem, North Carolina community, city life is sometimes difficult for me.  To put Seoul in perspective, Seoul is the 5th largest city in the world.  The metropolitan area has approximately 23 million people while the country has a population of slightly under 50 million people.  That's right- half the country lives here in the city.  The country is also surprisingly small- it is only about the size of Indiana (a state who has a population of the Seoul metropolitan area).  Getting out of the city is vital to my happiness.
Saturday afternoon, I met up with 4 friends to head up to Sokcho, a city in the top corner of Gangwon-do Province a few hours from Seoul.  I wish we had planned more time for actually seeing the city of Sokcho because it was an amazing little place.  The city was incredibly clean, had little traffic, has a Rodeo Street with tons of cute shops (Korea loves to label all their shopping streets Rodeo- there are at least 2 that I know if in Seoul alone), has beautiful beaches (still too cold for that though), and is famous for its seafood.
After we got off the bus, we immediately checked into our hostel (one of the best I've ever stayed at-- very clean and colorful with the most helpful and friendly owner), then hopped on a bus hoping to get to Naksan Temple -a pristine Shilla dynasty complex- by sunset.  We just missed sunset, but the views from the Temple were still spectacular.  Naksan is on a mountain on the coast and the view from the top is amazing-- the mountains are behind the complex, the lights of Sokcho are in the distance, and on the other side is the Sea of Japan.  The temple is definitely my favorite so far in Korea.  The entire area was absolutely (and surprisingly) stunning, and I found myself saying, "I can't believe I am in Korea right now." (the temples and palaces in Seoul are great, but I think you lose something when you build a city around the area.  Nothing says beautiful and historical like a Dunkin' Donuts around the corner, overhanging smog, the noise of traffic, and concrete buildings in the background).  The best part of the temple grounds was the 53 foot tall statue known as the Gwanseum-Bosal.  The statue is at the center of a large plaza at the top of the mountain.  In front of the structure is hundreds of candles, to the right is the Sea, and behind it is the mountains.  It was amazing. 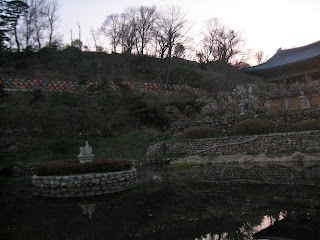 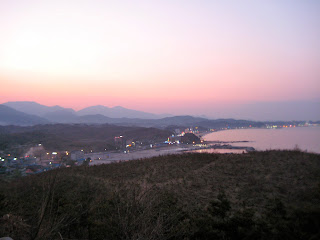 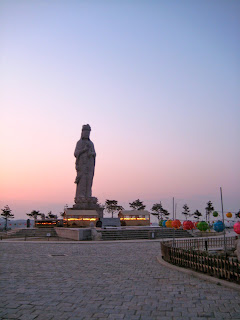 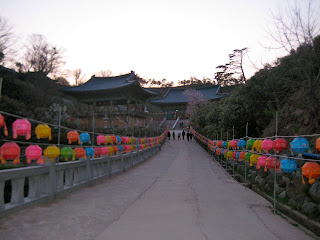 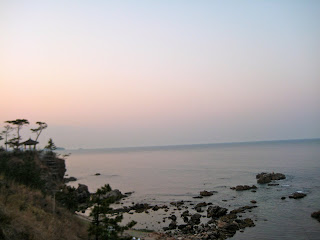 We explored Naksan for several hours before heading back into Sokcho.  We had a delicious all you can eat Korean barbeque dinner complete with chicken, beef, seafood, kimchi, and ice cream.  I like to think it tasted better outside the city.
Sunday morning we were up with the sun to catch the bus out to Seoraksan National Park.  Seoraksan is part of the Taebaek Mountains, and the mountain is the 3rd highest peak in Korea.  The big hike was closed, but there were still several hiking options for us.  We entered the park, stopping to take pictures of the Big Buddha, the mountains, the river, and the stacked rocks (I think this is a Buddhist form of prayer or a wish for good luck.  I'm unclear on the exact details, but these stones are stacked in piles all over the park.  There is something quite beautiful about them, and even clumsy foreign tourists like myself gingerly step around them because- call me superstitious-, but I don't want to knock any over for fear of destroying someone's hopes and dreams.) 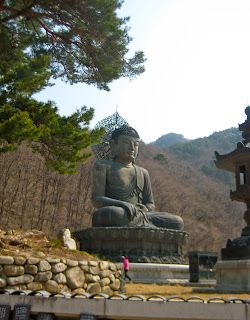 The Big Buddha in the Park 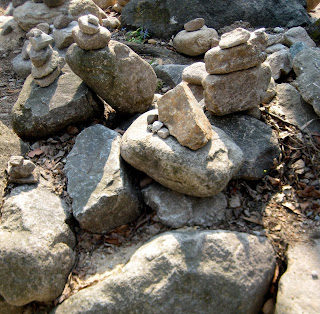 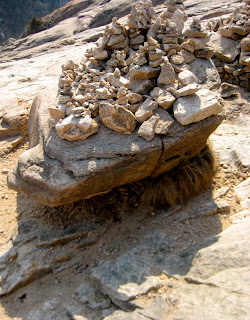 We decided to head up to Ulsanbawi.  This is a huge rock formation in the park that offers a fairly challenging hike.  Because Korea is so densely packed and because the park at Seoraksan is a treasured place among Koreans, the hike was crowded.  We joked on the way up that in America, most hikes are done by young people and sometimes you never see another hiker.  In Korea, it is the opposite.  Not only is getting lost in the wilderness not a feasible option (rest stops with food every kilometer and steps and railings guiding the way), but the hike is done by mostly pushy old people decked out in impressive gear.  Koreans love to get dressed up, and exploring the great outdoors is another opportunity to dress to impress.  Older couples in full hiking gear (pants, Under Armour, gloves, hats, walking poles, special glasses, the works) chatter up the trails.  (I would like to note that the gear is not limited to actual hiking.  I see people wearing the exact same thing when I jog in Olympic Park in the city.  It's highly unnecessary and hilarious.)
Despite the throngs of people, the hike was amazing.  The unique rock formation at Ulsanbawi was worth the bazillion stairs (that's right, stairs) we had to climb over the rock cliffs to make it to the top.  After or descent, we headed up in a cable car (terrifying) to another peak - Gwongeumseong Fortress (not a real fortress. A folklore mountain "fortress.")  At the top was a rock peak that required scooting up a steep rock - unfortunately, I only made it halfway up before I got very scared and scooted myself right back down to the bottom.  I might have missed the best views, but I got to see enough from the bottom of the rock formation on the mountain.  It was a clear day, and the mountains were stunning. 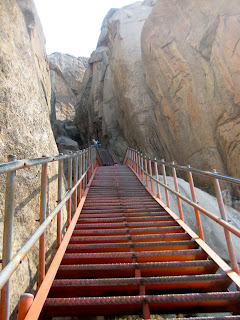 The stairs heading up to the summit at Ulsanbawi 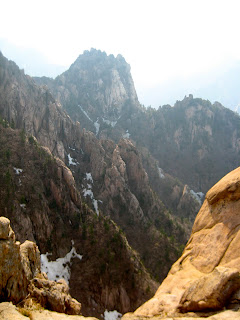 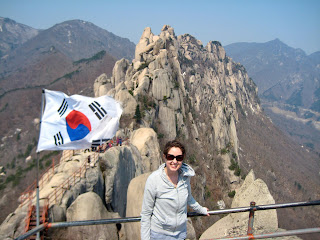 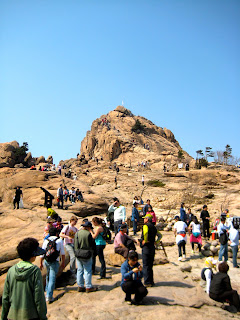 Gwongeumseong Fortress-- halfway up that rock is where I got scared :)
Exhausted, we headed back to Sokcho after our cable car adventure.  After a delicious seafood dinner, we headed back to Seoul.  Unfortunately, the weather hasn't been nice since our return and it has been 45 degrees and raining for the last 3 days.  In a defiant move that I'm sure my mother would call, "cutting off my nose to spite my face," I have refused to wear a coat all week because I've been "trying to show the weather."  Right now, the weather is winning, but hopefully soon, "I'll show it."  This weekend, I will run a 10k with a few friends, and next week I will leave for a 5 day trip south- Busan followed by Jeju Island!
Have a great week!
-Andie
Posted by Andie at 1:52 PM