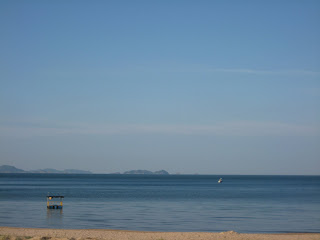 Our view from the tent in the morning! 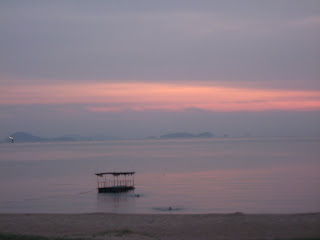 Sitting on the beach watching the sunset 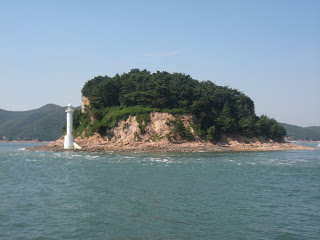 Another island we passed on the way to our island
Hi all,
It is a rainy Monday here in Seoul, and fall is definitely here.  I have finished teaching for today (I love Mondays- my 4th grader's are really good and so fun to work with!), and I wanted to give you all an update on my weekend in the great outdoors.  I stayed in Friday night to get some sleep, and I woke up early on Saturday and headed towards Incheon station (all the way on the west side of Seoul at the verrrry end of one subway line) to meet my friends Jason and Nick for camping.  We met up at the station then headed to the Incheon port to catch the ferry for Deokjeokdo Island.  A one hour ferry ride and a short bus ride later we were sitting on a beautiful beach looking out into the bay.  After some sunbathing on the beach, we swam out to a rustic metal boat out from shore.  The water was pretty chilly and once I climbed up on the boat I was freezing.  We only stayed on the boat a short time before heading back to the beach.  Starving, we headed to find some food.  Deokjeokdo, however, is pretty rural.  We found one restaurant and had a delicious meal that was incredibly overpriced/they totally saw us coming.  Following this, we headed back to the beach to set up camp.  The beach was small, but it had basketball nets, volleyball nets, 2 restrooms, and a wide stretch of sand that went back to the woods.  We chose a spot at the top of the sand in front of the trees.  The sunset was beautiful!  The beach, however, rapidly expands when the tide goes out.  We had never seen anything quite like it- the water went out for hundreds and hundreds of yards.  After it got dark, we walked out in the bay where the water had been over our heads only hours earlier.  It was really cool.  The metal boat and other fishing boats were just sitting on the sand.  We hung out and had some beers on the beach for awhile, but we went to bed pretty early, and all 3 of us crammed in the little tent.  One of my friends was nice enough to bring me a sleeping bag, and although the night was kind of chilly, in the sleeping bag all zipped in the tent, we were not cold at all.
We woke up early on Sunday and sat for a little while on the beach before heading to town.  Because we spent all of our cash on the outrageously expensive dinner Saturday night and the rural island didn't have any place that took debit cards, the man who owned the restaurant told us he would drive us to the ATM by the port at 9am.  After piling in the back of a truck with lots of fisherman, we finally got dropped off at Doekjoekdo's one ATM machine.  Finally with money, we found a restaurant and had a good brunch of rice and some sort of weird black sauce.  We had about five hours until the ferry left, so we hiked to a little beach we saw and laid out for a few hours.  Here, the tide also went out an extreme amount.  According to our calculations (aka Jason's footsteps), the tide went out 800 yards.  It was nuts, but it was also really cool.  The sand was more like mud and it was full of little critters - tons of crabs, snails, fish, etc.  We walked out across the flats to the water (which was dirty on this side of the island), then went back and got some sun before catching the ferry back to Incheon.
Although I had a great weekend, I came back kind of pink.  It's only my face, and I don't think it is that bad.  Anyway, Koreans don't go in the sun -they constantly reapply sunscreen and apply skin whitening creams - tanning is a completely foreign concept to them- they avoid the sun at all cost.  All day the students stared at me, laughed and would say "Teacher, Your Face REDDDD."  Or they just per usual stare at me as if I am from outer space.  The other teachers keep asking me if I was ok.  The principal looked at me this morning and sincerely said "Is your health ok?  Uh, Andie, what happen your face?"  One vice principal goes, "Are you angry today?"  You red.  You look like fire engine," and the other vice-principal said, "what has happened to you?"  I reply, "sunburn," and he goes "NO, it CANNOT BE!" It cannot be! Cannot! Did you have a "cosmetic accident?"  No, I say, I am just a little sunburnt.  Five minutes later, the school secretary who doesn't speak a word of English tried to give me an icepack for my face.  So embarrassing.  Late afternoon, the principal walked by, handed me a tomato, laughed, and walked away.  I'm pretty sure he was making fun of me.  Now I have learned my lesson though, and will not be venturing out in the sun for the next year of my life.
Miss you all!
Posted by Andie at 10:21 PM