Just another week in Seoul 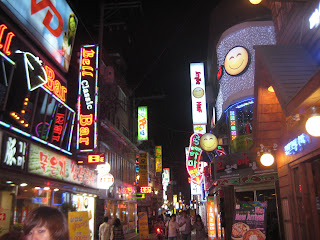 Konkuk University area on Saturday night
Hi all,
It's been another great week in Seoul, and I am looking forward to my upcoming long weekend.  Last week flew by - I stayed busy every day meeting up with friends after work and enjoying the city.  Thursday, FINALLY, was pay-day so I am now a millionaire.  Seriously though, after I got paid, I immediately bought a one year gym membership, worked out (FINALLLY!), and then I spent Thursday night celebrating the end of my poverty at a rooftop bar overlooking the city in Gangnam sipping chocolate martinis with my friends.  So this was probably excessive, but it was a good celebration for all we have been through together the last month.
To further my happiness, Friday was a school holiday at Gil-Dong Elementary.  The calender I got said it was a "Self-Control Day" which no one seemed able to explain to me.  I'm pretty sure something was very lost in translation, but I'm not one to complain for a paid day off.  I spent the day shopping in my neighborhood for necessary apartment items.  I'm now the proud owner of things like spoons, a collander, picture frames, cleaners of every type, and a squeegee mop so I can not hate my bathroom the following hours after I shower.  I also got my boxes from Mom and Dad on Friday- finally FedEx delivered them! Friday was pretty much the greatest day ever.... I now also have bedsheets!  Thanks Mom!
Friday night I went all the way across Seoul to On the Border for terrible, overpriced Mexican food for my friend's birthday.  Saturday, I got up early and met some girlfriends to shop at Myeong-Dong.  This area is amazing- its just tons of stores crammed into a few blocks where the streets are all walking streets with tons of vendors for food and junk on them.  They actually have one street that is all shoes.  It is completely overwhelming, but so much fun.  I got a few things, but we left around 3pm because the crowds just got too intense.  Saturday night I went to the Seoul drum festival (so cool!) then spent the rest of the night out in the Konkuk University area with friends.  It was really fun until five of us waited in line to get into a bar only to be told by the bouncer that we couldn't come inside.  When I asked why he said, "because of your skin. You can't come in because you white."  I've never been discriminated against, and it really made me angry.
Monday morning I was back at school for another short week.  We have Friday and next Monday off for Chuseok (like Korean Thanksgiving).  This week I realized I have more kids with crazy English names.  Today I had one who had a nametag that said "Hell" and another that said "Black."  I still can't call on poor Transformer without cracking up inside.  I had the kids brainstorm words that relate to Chuseok for an activity the other day.  They had recently learned about utensils and some food items so I thought it would work.  Later, I was scanning one kid's sheet of paper and it read, "Game, Song, Money, Grandpa, Grandma, my Babymama" Babymama? Really?  You're 10...how did you get that word?
Yesterday, I got in trouble with the principal. I was trying to get off work a little early for an appointment.  I have a log I keep when I leave work and I have to get it signed by the principal. Unfortunately, yesterday, I wrote the one line entry in red pen.  I'm still not exactly sure of the cultural issues Korea has with red pen and marker, but I think it means something like blood, death or bad luck, and when I took the log to my principal you would have thought I came at him weilding a butcher knife.  He FREAKED out on me, and I had to redo my entire log and make a new one.   He was like "this is like blood! Andie! No! No!  Andie! Red pen! No! Andie, you go get new paper and redo this. This bad. This not good" I probably inappropriately responded, "can I use white out?" And he just took it from me and wouldn't give it back.  I think he thought I was trying to kill him or curse him.  I was so embarrassed haha.... he didn't speak to me the rest of the day.
Anyway, last night I had a great dinner with a friend at a korean barbeque place that was fantastic.  I am going out tonight and tomorrow night too - the food here is just so good!  Friday morning I am flying to Tokyo to visit Rachel- one of my roommates from senior year.  I am so excited!  I will let you all know how the trip goes when I get back next week!
Below is a video of Gil-Dong Elementary School's 3rd Grade Field Day.  These kids have been doing this for 2 days now and they line up like this all day.  It is hilarious!
Posted by Andie at 4:59 PM