Happy New Year from the ROK 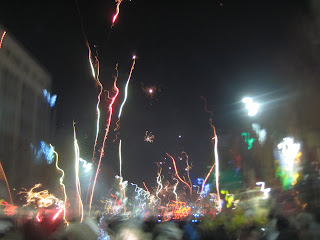 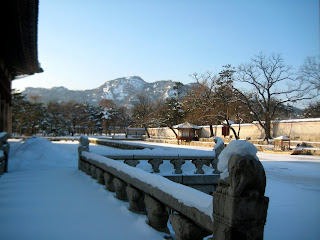 Gardens at Gyeongbokgung in the Snow 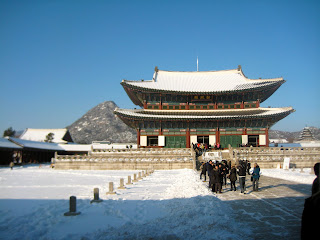 Gyeongbokgung in the snow 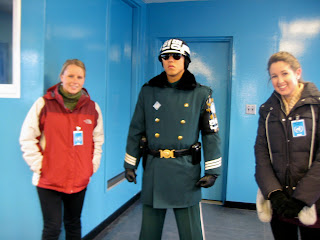 Rachel and I in the MAC Building at the JSA on our DMZ Tour (We're in North Korea. Kind of.) 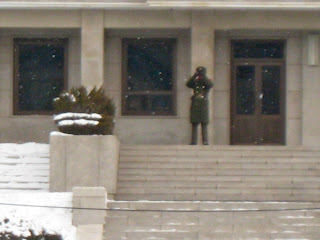 North Korean Military looking into South Korea at the JSA during our DMZ Tour
Happy 2010!
The holiday season in Korea was merry, and I finished up the school year on December 18th.  In full hibernation mode, I didn't do too much celebrating besides seeing the Nutcracker Ballet at the Seoul Arts Center and having a fun gift swap nuraebong (karaoke room) night with  my friends.  After the freezing weather in Seoul, I was ready for warmer climate, and I flew all the way home to Georgia on December 20th.  Despite the jetlag, being home was absolutely wonderful.  I got to visit with family and friends, sleep on a mattress that gives, drive my car, watch tv, use a dryer (no more crunchy jeans!), and eat hummus, Mexican food, and other wonderful things.  As much fun as I had at home, it made me realize that I am not ready to leave Korea just yet-- I was anxious to get back.  I decided to spend New Years in Seoul, and trekked back across the Pacific on December 29th only to be greeted by snow and ice.
New Years Eve in Seoul was a sight to see.  I made the unfortunate decision (at the time I thought this was a great idea), to stand outside near City Hall and watch a gigantic bell ring at midnight.  Not only is the bell exciting, but everyone brings packs of roman candles into the streets and at midnight, thousands of people start lighting them.  It's really fun, yet terrifying at the same time.  Luckily, I survived this Korean version of Times Square involving fire.  Before I arrived that evening, I thought New Years Eve at City Hall was a cultural "must-see" for my time here.  Granted, it was interesting, but I have never, ever been so cold in my entire life and will never, ever feel compelled to stand outside to ring in a new year in the future.  Next year, I plan to be in a cocktail dress watching any "must-see" cultural action from the comfort of a television.
I started District Winter English Camp on January 4th.  For two weeks, I am working from 9-12 at a nearby elementary school for a camp with the lovely title, "Fly With English Wings."  My co-teacher and I teach the same lesson multiple times, and I've been getting kind of bored, but it is fairly easy and even though I'm only working 15 hours a week I am getting overtime pay. Not a bad deal at all.  I'm actually kind of excited for Friday when my group will perform a dramatic interpretation of "Brown Bear, Brown Bear, What Do You See?"  On Monday, district camp will end and I will start a one week English Camp at my elementary school.  I am kind of nervous about this, but I think my lesson plans are fun, and I'm excited to see how it goes.
The last week, has been miserably cold in Seoul.  On the 4th, the city got more snow than it had seen in a century.  As much as I would have favored amping up my hibernation mode, my friend Rachel flew in from Tokyo on the 5th for a weeklong visit.  We had so much fun, and I am proud to say that I think I now know the city well enough to show everyone around (so all who read this please come visit me for your free tour).  We toured Gyeongbokgung Palace (stunningly beautiful in the snow), shopped the traditional shops at Insa-dong, ate tremendous amounts of Korean food, walked around the City Hall area, the Gangnam area, and Bokchon Folk Village.  Saturday, we got up early and went on a DMZ tour.  We got to go into the Joint Security Area where we awkwardly took pictures of stone-still ROK soldiers staring at the North and more photos of North Korean military with binoculars looking into the South.  We were also allowed into the MAC Building where we technically got to stand in North Korea (kind of).  This was followed by a hike down into the 3rd tunnel (one of the many tunnels North Korea dug in attempt to get into South Korea), and an observatory deck that looks into North Korea.  The day was really informative, and Rachel and I had a really good time.
I will try and be better about updating my adventures!  Hope all of you are having a great start to the new year!
-Andie
Posted by Andie at 7:49 PM