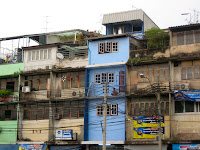 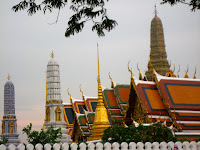 Heading for the Palace in Bangkok 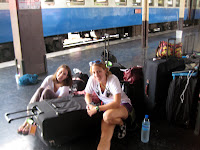 Katy and I with all of our bags about to leave Chiang Mai on a gross overnight train experience
Hi everyone!
Things have gotten very busy since I left Chiang Mai!  I left with 5 other members of my group last Sunday afternoon on a 15 hour train ride down to Bangkok.  Luckily, we got the airconditioned regular car; however, the seats barely reclined and the fluorescent lights also did not turn off at all so it was hard to sleep.  There were dozens of cockroaches scampering everywhere (I swear those things follow me everywhere I go- I was very proud of myself for not freaking out), and there was only a squat toilet in the "bathroom."  Do you know how hard it is to use a squat toilet on a moving train? I am barely coordinated enough to use one of those when not on a rough train ride.   Anyway, about 6am the next day we arrived in Bangkok.  We then all had to unload our tons of luggage (16 suitcases to be exact) and headed over to Khao San Road.  This is basically a crazy street for foreigners. There are thousands of backpackers and vendors and food.  There are fortune tellers, taxis, motorbikes, and tuktuk drivers.  Literally anything you would ever want is on this road.  Its disgusting, loud, dirty, and probably the craziest scene I’d ever seen.  Our little hotel was also pretty gross.  It didn't have airconditioning, the window in the bathroom was broken out, and the shower was something akin to a hose on the wall.  Only a few of us stayed- the rest only stayed one night then took a train down to the beaches.  I don't blame them!  Island hopping in Thailand is definitely on my to-do list.  I would have gone had I not had to go to the embassy for my visa. (Luckily I did get a visa with no problem at all and now can work in Korea!)  Anyway, Bangkok was fun enough-I saw some temples, the palace, and did some exploring- I wasn't a huge fan though, and I don't plan on going back there.  I think Chiang Mai really spoiled us.  (I've updated my picassa page so you can see Bangkok- I also added a lot of photos to the rest of the albums from Thailand too :  http://picasaweb.google.com/AndieVaughn )
I high-tailed it out of Khao San Road and Bangkok about 3am last Thursday morning.  I flew to Tokyo then on to Seoul.  I arrived several days before any of my friends, and I had booked a hostel.  Long story short, I also high-tailed it out of this hostel after one miserable night and then stayed in a much better area of Seoul.  I was going to spend the days exploring the city, but I am embarrassed to say that I only ate Starbucks for 3 days straight (please don't judge), sat in the hotel bathrobe, and watched Korean television.  I really needed the break from everything though, and it was refreshing to relax.  Sunday morning I met up with my friends who arrived, and we took the bus to our week-long orientation in Suwon (Thank goodness this is the last place I have to haul my 1 ton of luggage.  I'm getting ready to unpack!)  I am currently on lockdown - quarantined by the government for fear that one of the 500 of us at this orientation may have H1N1.  I got a notice earlier today that the tour of Seoul (the only fun thing on our schedule of seminars and lectures) was cancelled and instead the program "will be replacing that timeslot with daily temperature checks done by nurses." Whoo hoo.  When we arrived at orientation each of us got a thermometer and we already have to report our temperature every day.  Our accommodations here aren't bad (we are in a pretty nice college dorm), but I think all 500 foreigners here are really ready to get done with everything here and get settled.  I've made some new friends though, and I am having fun.  It is nice to get to know people before we head out on our own.  I found out yesterday that I am going to be working at an elementary school in Seoul (probably starting Monday) so that is exciting - it is the age group that I was hoping for!
I should get shipped out of here on a bus Saturday afternoon.  Apparently (assuming no one gets swine flu and they hold us here longer) we are taken to our apartments and given tours of our schools that day.  I am very excited to start work, but also a little nervous- I feel like the first couple of weeks are critical and will really determine how much these kids and I are going to click.  Miss you all!
Posted by Andie at 11:58 PM