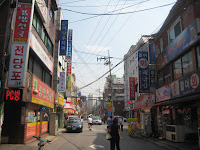 My new street!
Hi!
So I'm currently paying to use iternet at a pc bang in a basement where like 1000 korean middle schoolers are playing world of warcraft or something like that.  Anyway, I got up early, loaded buses at orientation/lockdown, did ceremony stuff which was really boring, then left about 1pm for Gangdong-gu.  When we arrived, we took a tour of the SMOE district office then waited nervously in a conference room waiting on our co-teachers to arrive.  When they started to show up, all of the people in the room, including myself, felt like children waiting to be adopted- it was really scary. This man and this woman drive up and they are mine.  They dont speak much english.  The man- bless his heart- loaded all my heavy luggage into this SUV that only had 2 seats so the lady rode in the back with my stuff.  I make awkward simple sentence small talk with the man who is head of the 6th grade at the school.  The woman is a 1st grade teacher- not my co-teacher but very nice nonetheless.
They take me to the school where 2 vice principles and the principle are waiting for me.  We go in the principal's office, and they all start talking to me.  I miss most of what they are saying, but they all did get very concerned when I said I am 22-  they are like oooohhh very young very pretty and they were so worried when I said I was alone--- the principal kept trying to warn me about going out at night.  After that awkward conversation, they realized my "room" didnt have bedding.  I started thinking uh-oh a room -not an apartment. We then all headed out to see my new place for the next year.  I was absolutely terrified!  The administration was like having my parents times 3 on college move in day- then the people that own the apartment building were helping and everyone was unloading my stuff and putting stuff everywhere-- it was a disaster.  the principle was on the floor trying to plug stuff in behind pieces of furniture.  The room is very small -probably smaller than a hotel room, but the building is brand new so everything is very nice and modern. I have a small stove top, very nice sink, and minifridge with a freezer.   One wall is hot pink with flowers and the bathroom is new neon yellow tile.  There is a kitchenette and cabinets on one wall and an armoir in the corner next to the bed.  There is a bathroom but there is no shower- the shower is hooked to the sink but Im going to have to work witht that I guess. Im more bummed I dont have a dryer.  I am going to have to figure something out about that.
Anyway, then principal was like "follow me and we go to store to buy bedding"... all 6 of us head down the road to this tinyyyy store and they let me pick out what I wanted. So I got 2 blankets and a pillow-- apparently they do not have sheets?  Then they take me to buy pots and pans and stuff- I'm not set- like I need more stuff for sure but I'llgo tomorrow or something and get more- I have the basics at least right now. I felt bad asking for things like a collander and accessories.  Then the men all left and the woman-Kim- and i signed paperwork.  Following this, Kim and Liz (the landlord's wife who is SO nice) took me to the grocery store to show me it, but there is an AMAZING market down the street-- its like the one in Paris I loved so much!!  Then they took me to the subway- which is like  maybe a 2 min. walk! YES.
Anyway, I got back and see my friend Arianna and 4 other SMOE kids coming in! There are tons of foreigners in the building and Arianna lives down the hall.  I am SO happy with everything.  I'm going to go shopping tomorrow and get like an iron and ironing board and mre kitchen stuff and maybe a fullsize mirror and set myself up.  I need to figure out sheets- apparently they dont have them but I'm going to look.  I also need to get some groceries and stuff.  I cant get a phone until i get my alien registration card but i need paperwork for that.
Anyway, I'm getting settled, and I am very lucky with how everything turned out!
Posted by Andie at 12:06 AM